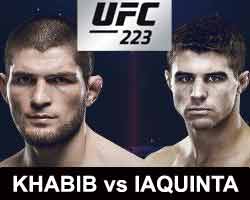 Review by AllTheBestFights.com: 2018-04-07, good fight between Khabib Nurmagomedov and Al Iaquinta: it gets three stars.

The undefeated black belt in judo and two time combat sambo world champion Khabib Nurmagomedov entered this fight with a perfect mma record of 25-0-0 (64% finishing rate) and he is ranked as the No.3 lightweight in the world (currently the #1 in this division is Eddie Alvarez). After suffering different injuries between 2014 and 2015, he fought twice in 2016 winning over Darrell Horcher (Nurmagomedov vs Horcher) and Michael Johnson (Johnson vs Nurmagomedov), and once in 2017 beating Edson Barboza (Khabib Nurmagomedov vs Edson Barboza).
His opponent, Al Iaquinta (who replaces Max Holloway since was deemed medically unfit on the weigh in day – Holloway was the replacement of Tony Ferguson), has a mma record of 13-3-1 (62% finishing rate) and he entered as the No.13 in the same weight class. He suffered his last loss when he faced Mitch Clarke in 2014, since then he has collected five victories beating Jorge Masvidal (Iaquinta vs Masvidal) and Diego Sanchez in his last two (Diego Sanchez vs Al Iaquinta). Khabib vs Iaquinta, main event of Ufc 223, is valid for the Ufc lightweight title. Watch the video and rate this fight!

(Free embeddable video hosted on Youtube and not uploaded by AllTheBestFights)
https://www.youtube.com/watch?v=zWvTCMz8jhc