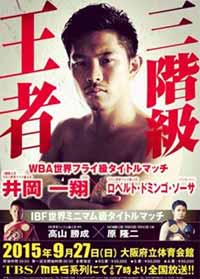 Review by AllTheBestFights.com: 2015-09-27, good fight between Kazuto Ioka and Roberto Sosa: it gets three stars.

Kazuto Ioka entered this fight with a professional boxing record of 17-1-0 (10 knockouts) and he is ranked as the No.3 flyweight in the world (currently the #1 in this division is Roman Gonzalez). He has won world titles in three different weight classes but he suffered his first loss last year when he faced Amnat Ruenroeng (=Ioka vs Ruenroeng), after this bout he has won three consecutive fights beating Juan Carlos Reveco in his last one (=Reveco vs Ioka).
His opponent, Roberto Domingo Sosa, has an official record of 26-2-1 (14 knockouts) and he entered as the No.47 super flyweight. He lost to Diego Luis Pichardo Liriano in 2014, then he came back to win in 2015 winning over Carlos Ruben Dario Ruiz and he drew with Javier Nicolas Chacon. Ioka vs Sosa is valid for the WBA World flyweight title. Watch the video and rate this fight!