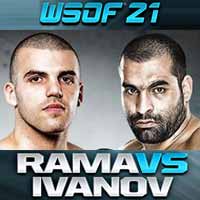 Review by AllTheBestFights.com: 2015-06-05, Smealinho Rama vs Blagoi Ivanov gets three stars thanks to a good finish.

Smealinho Rama entered this fight with a pro mma record of 9-1-0 (89% finishing rate) and he is ranked as the No.26 heavyweight in the world. He suffered his only defeat in 2013 when he faced Anthony Hamilton, since then he has won three bouts winning the Wsof Hw belt in his last fight, against Derrick Mehmen (=Rama vs Mehmen).
His opponent, the black belt in judo and 2008 Combat Sambo world champion (beating Fedor Emelianenko in the semifinal) Blagoi Ivanov, has a record of 11-1-0 (82% finishing rate) and he entered as the No.42 in the same weight class. He fought three times last year defeating Rich Hale and Lavar Johnson (=Johnson vs Ivanov) but then he lost to Alexander Volkov (final of the Bellator Hw tournament Volkov vs Ivanov). Rama vs Ivanov is valid for the WSOF heavyweight title (Rama’s first defense); undercard of Lance Palmer vs Chris Horodecki – WSOF 21. Watch the video and rate this fight!