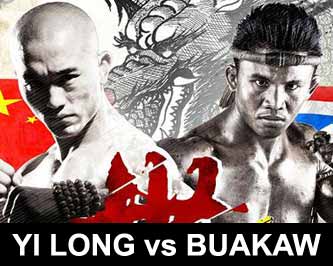 Review by AllTheBestFights.com: 2015-06-06, tough fight but with too many interruptions: Buakaw Banchamek vs Yi Long gets two stars.

The two time K-1 World MAX champion Buakaw Banchamek, formerly known as Buakaw Por Pramuk, entered this fight with a professional kickboxing record of 257-41-12 (65 knockouts) and he is ranked as the No.5 super welterweight while his opponent, the Shaolin kung-fu fighter Yi Long, has an official record of 47-5-1. Buakaw suffered his last defeat in 2014 when he faced Enriko Kehl in the final of the K-1 World MAX (but it was a controversial ending, Buakaw vs Kehl 2); after this bout he came back to win beating Steve Moxon (=Buakaw vs Moxon), Dmytro Konstantynov (=Buakaw vs Konstantynov) and Yan Bin (or Yuan Bing, Buakaw vs Bin). Buakaw vs Yi Long is the main event of Wu Lin Feng World Championship 2015; they also faced each other a second time on November 5, 2016 (=Buakaw vs Yi Long II). Watch the video and rate this fight!