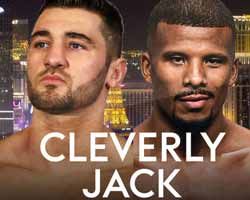 Review by AllTheBestFights.com: 2017-08-26, pretty good fight between Nathan Cleverly and Badou Jack: it gets three stars.

The former Wbo and current Wba light-Hw champion Nathan Cleverly entered this fight with a pro boxing record of 30-3-0 (16 knockouts) and he is ranked as the No.7 light heavyweight in the world (currently the #1 in this division is Andre Ward). He lost to Andrzej Fonfara in 2015 (4-stars fight, Fonfara vs Cleverly) but he came back to win in 2016 against Juergen Braehmer (=Braehmer vs Cleverly).
His opponent, the former Wbc super-Mw champion Badou Jack, has a record of 21-1-2 (12 knockouts) and he entered as the No.11 in the same weight class. He suffered his only loss when he faced Derek Edwards in 2014, after this bout he has collected five victories and one draw, against James DeGale in his last bout (4-stars fight, DeGale vs Jack). Badou Jack vs Nathan Cleverly is valid for the WBA World Light Heavyweight title; undercard of Floyd Mayweather Jr vs Conor McGregor. Watch the video and rate this fight!

(Free embeddable video hosted on Youtube and not uploaded by AllTheBestFights)
https://www.youtube.com/watch?v=BbF6m_xTU4Y