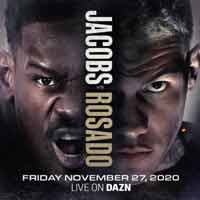 Review by AllTheBestFights.com: 2020-11-27, disappointing fight between Daniel Jacobs and Gabriel Rosado: it gets two stars (take a look at our ranking of the best boxing fights of 2020).
The former Wba and Ibf Mw champion Daniel Jacobs entered this fight with a boxing record of 36-3-0 (30 KOs=83%) and he is ranked as the No.2 super middleweight in the world (currently the #1 in this division is Callum Smith). He fought twice last year losing to Saul Canelo Alvarez (Saul Canelo Alvarez vs Daniel Jacobs) and beating Julio Cesar Chavez Jr (Daniel Jacobs vs Julio Cesar Chavez Jr).
His opponent, Gabriel Rosado, has an official record of 25-12-1 (14 knockouts) and he entered as the No.31 middleweight. He also fought twice in 2019, losing to Maciej Sulecki (Maciej Sulecki vs Gabriel Rosado) and beating Humberto Gutierrez Ochoa. Rosado vs Jacobs is the main event of the evening. Watch the video and rate this fight!