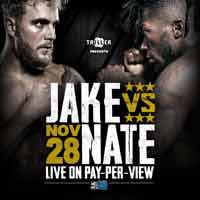 Review by AllTheBestFights.com: 2020-11-28, Jake Paul vs Nate Robinson gets three stars thanks to a very nice finish (take a look at our ranking of the best boxing fights of 2020).
Jake Paul, American YouTuber, Internet influencer, actor and musician, entered this fight with a professional record of 1-0-0 (1 knockout) and he is ranked as the No.780 cruiserweight in the world; here is his only pro boxing fight Jake Paul vs AnEsonGib. Jake is also the brother of Logan Paul, another famous YouTuber (who fought in November 2019 in the rematch with KSI, KSI vs Logan Paul 2), and they both fought on February 24, 2018 in an amateur bout in which Jake defeated Deji (brother of KSI) in five rounds.
His opponent, Nathaniel Robinson, is at his pro boxing debut since he is a former NBA basketball player: he played for the Chicago Bulls, New York Knicks, Boston Celtics, Oklahoma City Thunder, Golden State Warriors and Denver Nuggets; Nate Robinson was also a 3× NBA Slam Dunk Contest champion. Jake Paul vs Robinson (Youtuber vs Nba player) is on the undercard of Mike Tyson vs Roy Jones Jr. Watch the video and rate this fight!