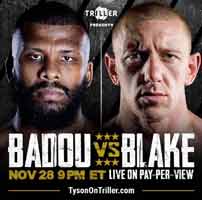 Review by AllTheBestFights.com: 2020-11-28, nice exchanges between Badou Jack and Blake McKernan: it gets three stars (take a look at our ranking of the best boxing fights of 2020).
The former Olympian, former Wbc super-Mw and Wba light-Hw champion Badou Jack entered this fight with a pro boxing record of 22-3-3 (13 knockouts) and he is ranked as the No.11 light heavyweight in the world but he comes off two consecutive losses, against Jean Pascal in December 2019 (Jean Pascal vs Badou Jack) and Marcus Browne in January 2019 (Badou Jack vs Marcus Browne); before this bout, in 2018, he had beat Adonis Stevenson (Adonis Stevenson vs Badou Jack). If you want to watch Jack’s best fight, here is one rated with 4 stars: James DeGale vs Badou Jack.
His opponent, the undefeated Blake McKernan, has a perfect record of 13-0-0 (6 knockouts) and he entered as the No.133 cruiserweight. In his last three bouts he has won over Jorge Escalante, Joey Montoya and German Perez. McKernan vs Jack is on the undercard of Mike Tyson vs Roy Jones Jr. Watch the video and rate this fight!