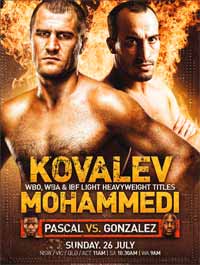 Review by AllTheBestFights.com: 2015-07-25, close fight with some very nice and tough exchanges: Jean Pascal vs Yunieski Gonzalez is very close to get four stars!

The former Wbc and Ibo light-Hw champion Jean Pascal entered this fight with a pro record of 29-3-1 (17 knockouts) and he is ranked as the No.7 light heavyweight in the world but he comes off the loss against #1 Sergey Kovalev (one of the best boxing fights of 2015, Kovalev vs Pascal).
His opponent, the undefeated Yunieski Gonzalez, has a perfect record of 16-0-0 (12 KOs=75%) and he entered as the No.52 in the same weight class but he has not faced any notable opponents in his professional career. Pascal vs Gonzalez is on the undercard of Sergey Kovalev vs Nadjib Mohammedi. Watch the video and rate this fight!