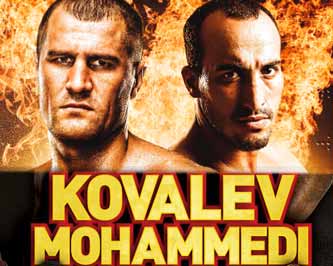 Review by AllTheBestFights.com: 2015-07-25, fight not particularly exciting between Sergey Kovalev and Nadjib Mohammedi: it gets two stars.

The undefeated Sergey Kovalev entered this fight with a professional record of 27-0-1 (24 KOs=89%) and he is ranked as the No.1 light heavyweight in the world. He has already fought once in 2015 beating Jean Pascal in one of the best boxing fights of the year (=Kovalev vs Pascal).
His opponent, Nadjib Mohammedi, has an official record of 37-3-0 (23 knockouts) and he entered as the No.12 in the same weight class. He suffered his last defeat in 2011 when he faced Dmitry Sukhotsky, since then he has won 13 consecutive fights beating Lee Campbell in his last one. Kovalev vs Mohammedi is valid for the WBA, IBF and WBO World light heavyweight titles (all held by the Russian). Watch the video and rate this fight!