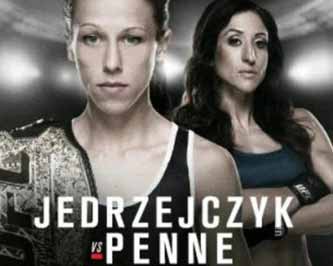 Review by AllTheBestFights.com: 2015-06-20, great fight between Joanna Jedrzejczyk and Jessica Penne: it gets three stars (UFC Fight of the Night).

The former kickboxing and muay thai champion Joanna Jedrzejczyk entered this fight with a perfect mma record of 9-0-0 (44% finishing rate) and she is ranked as the No.2 women’s strawweight in the world (currently the #1 in this division is Jessica Aguilar). She has already fought once in 2015 beating Carla Esparza in a fight valid for the Ufc title (=Esparza vs Jedrzejczyk).
Her opponent, the black belt in Brazilian jiu-jitsu and former Invicta Fc atomweight champion Jessica Penne, has an official record of 12-2-0 (75% finishing rate) and she entered as the No.8 in the same weight class. She suffered his last defeat in 2013 when she faced Michelle Waterson (=Penne vs Waterson), after this bout she beat Nicdali Rivera-Calanoc and Randa Markos (=Penne vs Markos). Jedrzejczyk vs Penne, main event of UFC Fight Night 69, is valid for the Ufc women’s strawweight title (Jedrzejczyk’s first defense). Watch the video and rate this fight!