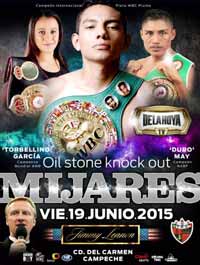 Review by AllTheBestFights.com: 2015-06-19, pretty good finish between Cristian Mijares and Vergel Nebran but it is not enough to get three stars: it gets two.

The former Wbc, Wba and Ibf world champion Cristian Mijares entered this fight with a professional boxing record of 51-8-2 (25 knockouts) and he is ranked as the No.17 featherweight in the world while his opponent, Vergel Nebran, has an official record of 13-8-1 (8 knockouts). Mijares suffered his last loss in 2014 when he faced Leo Santa Cruz in a fight valid for the Wbc super-Bw title (=Santa Cruz vs Mijares), after this bout he came back to win beating Sebastian Daniel Rodriguez (=Mijares vs Rodriguez) and Lester Medrano (=Mijares vs Medrano). Mijares vs Nebran is the main event of the evening. Watch the video and rate this fight!