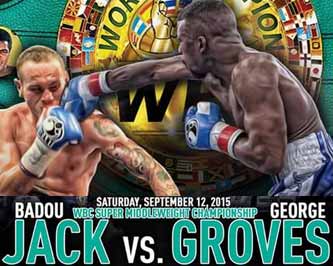 Review by AllTheBestFights.com: 2015-09-12, good performance by both fighters: George Groves vs Badou Jack gets three stars.

George Groves entered this fight with a pro boxing record of 21-2-0 (16 KOs=76%) and he is ranked as the No.5 super middleweight in the world (currently the #1 in this division is Andre Ward). Both his defeats occurred against Carl Froch (Froch vs Groves I and Froch vs Groves II) but after the second loss he came back to win beating Christopher Rebrasse (=Groves vs Rebrasse) and Denis Douglin (=Groves vs Douglin).
His opponent, Badou Jack, has a record of 19-1-1 (12 knockouts) and he entered as the No.13 in the same weight class. He lost to Derek Edwards last year but then he has won three consecutive fights beating Anthony Dirrell in his last one (=Dirrell vs Jack). Groves vs Jack is valid for the WBC World super middleweight title (Jack’s first defense); undercard of Floyd Mayweather Jr vs Andre Berto. Watch the video and rate this fight!