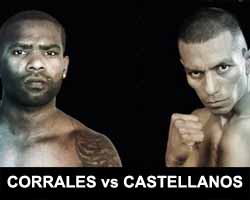 Review by AllTheBestFights.com: 2017-07-15, disappointing fight between Jezreel Corrales and Robinson Castellanos: it gets two stars.

The Wba super-Fw champion Jezreel Corrales entered this fight with a record of 21-1-0 (8 knockouts) and he is ranked as the No.3 super featherweight in the world (currently the #1 in this division is Vasyl Lomachenko). He suffered his only defeat when he faced Jhonatan Arenas in 2009, since then he has collected 20 victories and one no-contest beating twice Takashi Uchiyama in 2016 (=Uchiyama vs Corrales I and Corrales vs Uchiyama II).
His opponent, Robinson Castellanos, has a boxing record of 24-12-0 (14 knockouts) and he entered as the No.10 in the same weight class. He lost to Oscar Escandon last year (=Castellanos vs Escandon) but he came back to win in 2017 against Yuriorkis Gamboa (=Gamboa vs Castellanos). Jezreel Corrales vs Robinson Castellanos is valid for the WBA Super World super featherweight title; undercard of Miguel Berchelt vs Takashi Miura. Watch the video and rate this fight!