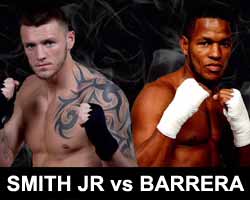 Review by AllTheBestFights.com: 2017-07-15, fight not particularly exciting between Joe Smith Jr and Sullivan Barrera: it gets two stars.

Joe Smith Jr entered this fight with a professional boxing record of 23-1-0 (19 KOs=83%) and he is ranked as the No.4 light heavyweight in the world. He suffered his only loss when he faced Eddie Caminero in 2010, since then he has collected 17 consecutive victories beating Fabiano Pena, Andrzej Fonfara (=Fonfara vs Smith) and Bernard Hopkins in 2016 (=Hopkins vs Smith).
His opponent, Sullivan Barrera, has an official record of 19-1-0 (14 knockouts) and he entered as the No.12 in the same weight class. He lost to #1 Andre Ward last year (=Ward vs Barrera) but then he has beat Vyacheslav Shabranskyy (=Shabranskyy vs Barrera) and Paul Parker (=Barrera vs Parker). Sullivan Barrera vs Joe Smith Jr is valid for the WBC International light heavyweight title; undercard of Miguel Berchelt vs Takashi Miura. Watch the video and rate this fight!