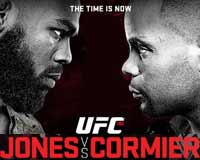 Review: 2015-01-03, pretty good fight between Jon Jones and Daniel Cormier, it was probably the only fight worth watching of a disappointing Ufc 182: it gets three stars (UFC Fight of the Night). Jon Jones entered this fight with a professional mma record of 20-1-0 (75% finishing rate) and he is ranked as the No.1 light heavyweight in the world; his only loss was, in reality, a disqualification suffered against Matt Hamill due to multiple “12-6 elbows” (strike brought from a high position toward the floor). Jon ‘Bones’ Jones is the Ufc light-Hw champion since March 19, 2011 when he defeated Mauricio ‘Shogun’ Rua (=Jones vs Rua), since then he has successfully defended the title seven times fighting just once in 2014, against Glover Teixeira (=Jones vs Teixeira).
His opponent, the undefeated 35-year-old Daniel Cormier ‘DC’ (8 years older than Jones), has a perfect record of 15-0-0 (67% finishing rate) and he entered as the No.2 in the same weight class, he fought twice in 2014 beating Patrick Cummins (=Cormier vs Cummins) and Dan Henderson (=Henderson vs Cormier). Jon ‘Bones’ Jones vs Cormier, main event of Ufc 182, is valid for the Ufc light heavyweight title (Jones’ eighth defense); they also faced each other a second time on July 29, 2017 (=Daniel Cormier vs Jon Jones 2). Watch the video and rate this fight!