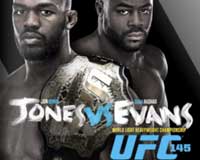 Review: 2012-04-21, some good shots in the first three rounds but it is not enough for a 25 minutes fight: we expected something more by Jon Jones vs Rashad Evans, two stars. Jon Jones (15-1-0) entered as the No.1 light heavyweight in the world while Rashad Evans (17-1-1) entered as the No.2. Jones vs Evans is valid for the UFC Light Heavyweight Championship title (Jon Jones’ third defense); main event of the UFC 145. Watch the video!

Video: we are sorry but we had to remove the full fight video which was hosted on “videos.sapo.pt” (since we have been contacted by UFC – Zuffa); the following video is the highlights of Jon Jones vs Rashad Evans.