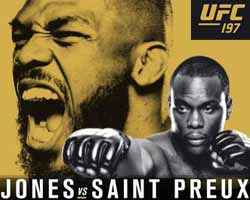 Review by AllTheBestFights.com: 2016-04-23, fight not particularly good between Jon Jones and Ovince Saint Preux: it gets two stars.

The black belt in gaidojutsu and former Ufc light-Hw champion Jon Jones entered this fight with a professional record of 21-1-0 (71% finishing rate) but he is not ranked as he hasn’t fought since January 3, 2015 when he defeated the current #1 Ufc champion Daniel Cormier (=Jones vs Cormier). After this bout, Jones was stripped of the belt and suspended from the UFC in connection with a hit-and-run incident that he was involved in. Jon ‘Bones’ Jones was originally scheduled to face Cormier, but Daniel injured his foot three weeks before the fight.
His opponent, Ovince St Preux, has an official record of 19-7-0 (74% finishing rate) and he entered as the No.13 light heavyweight in the world. ‘OSP’ lost to Glover Teixeira last year (=Teixeira vs St Preux) but he came back to win in 2016 defeating Rafael ‘Feijao’ Cavalcante (=Saint Preux vs Feijao Cavalcante). Jones vs St Preux, main event of the Ufc 197, is valid for the interim Ufc light heavyweight title. Watch the video and rate this fight!