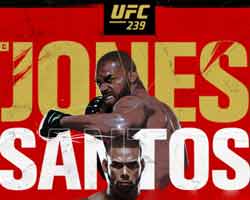 Review by AllTheBestFights.com: 2019-07-06, some good single shots between Jon Jones and Thiago Santos but it is not enough to get three stars: it gets two.

The black belt in gaidojutsu and current Ufc light-Hw champion Jon Jones entered this fight with a professional mma record of 24-1-0 (67% finishing rate) and he is ranked as the No.1 light-heavyweight in the world. Jones’ only loss was, in reality, a disqualification suffered against Matt Hamill in 2009 due to multiple “12-6 elbows” (strike brought from a high position toward the floor), since then he has collected 15 victories and one no-contest, against Daniel Cormier in 2017 (Jones defeated ‘DC’ via KO but he tested positive for turinabol so the result was overturned in a NC, Jon Jones vs Daniel Cormier I); after this bout he has beat Alexander Gustafsson (Jon Jones vs Alexander Gustafsson 2) and Anthony Smith (Jon Jones vs Anthony Smith).
His opponent, the black belt in Brazilian jiu-jitsu Thiago Santos, has an official record of 21-6-0 (76% finishing rate) and he entered as the No.6 in the same weight class. Thiago ‘Marreta’ was defeated by David Branch in April 2018 (David Branch vs Thiago Santos) but then he has won four fights beating Jimi Manuwa (Jimi Manuwa vs Thiago Santos) and Jan Blachowicz (Jan Blachowicz vs Thiago Santos). Jones vs Santos, main event of UFC 239, is valid for the Ufc light heavyweight title (Jones’ second defense). Watch the video and rate this fight!