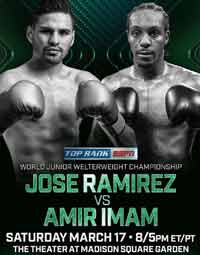 Review by AllTheBestFights.com: 2018-03-17, great fight between Jose Ramirez and Amir Imam: it gets three stars.

The undefeated Olympian Jose Carlos Ramirez entered this fight with a perfect record of 21-0-0 (16 KOs=76%) and he is ranked as the No.23 super lightweight in the world. He fought twice last year winning over Jake Giuriceo and Mike Reed (Jose Carlos Ramirez vs Mike Reed).
His opponent, Amir Imam, has an official boxing record of 21-1-0 (18 KOs=86%) and he entered as the No.64 welterweight. He suffered his only loss when he faced Adrian Granados in 2015 (Amir Imam vs Adrian Granados), since then he has won three fights beating Wilfredo Acuna, Jose Vidal Soto and Johnny Garcia. Ramirez vs Imam is valid for the vacant WBC World super lightweight title. Watch the video and rate this fight!

(Free embeddable video hosted on Dailymotion and not uploaded by AllTheBestFights)
https://www.dailymotion.com/video/x6gh6ia