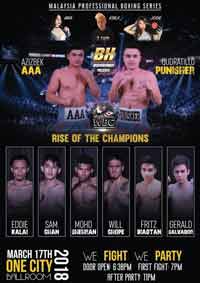 Review by AllTheBestFights.com: 2018-03-17, fight not particularly good between Kudratillo Abdukakhorov and Laszlo Toth: it gets two stars.

The undefeated Kudratillo Abdukakhorov entered this fight with a perfect record of 13-0-0 (9 knockouts) and he is ranked as the No.9 welterweight in the world (currently the #1 in this division is Jeff Horn). He fought five times last year beating Dmitry Mikhaylenko and Sherzodbek Alimjanov in his last two.
His opponent, Laszlo Toth, has a boxing record of 25-3-1 (17 knockouts) and he entered as the No.37 in the same weight class. He lost to Flavius Biea in 2017 but then he defeated Azad Azizov and Tsiko Mulovhedzi. Abdukakhorov vs Toth is valid for the WBC Silver welterweight title. Watch the video and rate this fight!