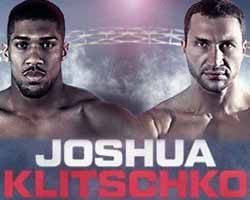 The undefeated 2012 Olympic super heavyweight gold medalist and current IBF world champion Anthony Joshua entered this fight with a perfect boxing record of 18-0-0 (18 KOs=100%) and he is ranked as the No.1 heavyweight in the world. ‘AJ’ fought three times last year winning over Charles Martin (=Martin vs Joshua), Dominic Breazeale (=Joshua vs Breazeale) and Eric Molina (=Joshua vs Molina).
His opponent, the 1996 Olympic super-Hw gold medalist and former Wbo, Ibf, Wba, Ibo champion Wladimir Klitschko (he is 41 years old, 14 years older than Joshua), has an official record of 64-4-0 (53 KOs=83%) but he is not ranked as he hasn’t fought since November 28, 2015 when he was defeated by Tyson Fury (=Klitschko vs Fury); before this fight he had beat Bryant Jennings (=Klitschko vs Jennings). Anthony Joshua vs Wladimir Klitschko is valid for the WBA, IBF and vacant IBO World heavyweight titles. Watch the video and rate this fight!