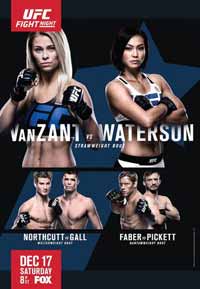 Review by AllTheBestFights.com: 2016-12-17, some good exchanges between Alan Jouban and Mike Perry but it is not enough to get three stars: it gets two.

The undefeated Mike Perry entered this fight with a perfect record of 9-0-0 (100% ko/tko victory rate – he has never won via submission) and he is ranked as the No.33 welterweight in the world. He has already fought four times in 2016 beating Hyun Gyu Lim (=Lim vs Perry) and Danny Roberts in his last two.
His opponent, Alan Jouban, has a mma record of 14-4-0 (71% finishing rate) and he entered as the No.53 in the same weight class. He lost to Albert Tumenov last year but he came back to win in 2016 defeating Brendan O’Reilly and Belal Muhammad (=Muhammad vs Jouban). Perry vs Jouban is on the undercard of Paige VanZant vs Michelle Waterson – UFC on Fox 22. Watch the video and rate this fight!