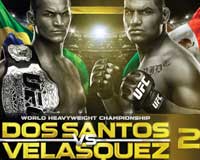 Review: 2012-12-29, after watching the rematch between Junior dos Santos and Cain Velasquez a second time, we give it three stars but it was close to get four since the first two rounds were very exciting thanks to a great pace and one knockdown, but in the following rounds the pace slows down and they are not as active as at the beginning; we would like to see a third fight very soon but we also know that Alistair Overeem is waiting for the UFC belt… Junior dos Santos (15-1-0) entered as the No.1 heavyweight in the world while Cain Velasquez (10-1-0) entered as the No.2. In their first fight JDS defeated Velasquez by ko (November 12, 2011); ‘Cigano’ dos Santos vs Velasquez 2 is valid for the UFC Heavyweight title (dos Santos’ second defense), main event of UFC 155. Watch the video!