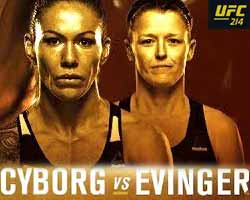 Review by AllTheBestFights.com: 2017-07-29, fight not so exciting between Cris Cyborg Justino and Tonya Evinger: it gets two stars.

The former Strikeforce and current Invicta Fc champion Cristiane Cyborg Justino (also known as Cris Cyborg Santos) entered this fight with a mma record of 17-1-0 (88% ko/tko victory rate – she has never won via submission) and she is ranked as the No.1 women’s featherweight in the world. She suffered her only loss at her pro mma debut, against Erica Paes in 2005, since then she has won 17 consecutive bouts winning the Invicta Fw title in 2013, against Marloes Coenen (=Cyborg vs Coenen 2), and defending it three times, the last one against Daria Ibragimova (=Justino vs Ibragimova). After this bout she fought twice in the Ufc beating Leslie Smith (=Cyborg vs Smith) and Lina Lansberg in 2016 (=Justino vs Lansberg).
Her opponent, the current Invicta FC Bw champion Tonya Evinger, has an official record of 19-5-0 (79% finishing rate) and she entered as the No.7 women’s bantamweight. She suffered two consecutive losses between 2010 and 2011, against Alexis Davis and Sara McMann, but then she has collected ten victories and one no-contest, beating Yana Kunitskaya in 2017 (=Evinger vs Kunitskaya 2). Cristiane Cyborg Justino vs Tonya Evinger is valid for the vacant Ufc women’s featherweight title; undercard of Daniel Cormier vs Jon Jones 2 – UFC 214. Watch the video and rate this fight!