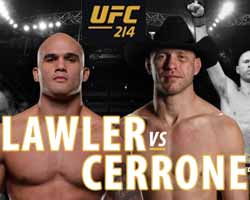 Review by AllTheBestFights.com: 2017-07-29, good performance by both fighters: Robbie Lawler vs Donald Cerrone gets three stars.

The former Ufc Ww champion Robbie Lawler entered this fight with a professional record of 27-11-0 (78% finishing rate) and he is ranked as the No.4 welterweight in the world. He fought twice last year beating Carlos Condit (4-stars fight, Lawler vs Condit) and losing to current #1 Tyron Woodley (=Lawler vs Woodley).
His opponent, the black belt in Brazilian jiu-jitsu and gaidojutsu Donald Cerrone, has a mma record of 32-8-0 (75% finishing rate) and he entered as the No.8 in the same weight class but ‘Cowboy’ comes off the loss against Jorge Masvidal (=Cerrone vs Masvidal); before this bout he had won over Matt Brown (=Cerrone vs Brown). Robbie Lawler vs Donald Cerrone is on the undercard of Daniel Cormier vs Jon Jones 2 – UFC 214. Watch the video and rate this fight!

Cerrone’s next fight: Donald Cerrone vs Darren Till