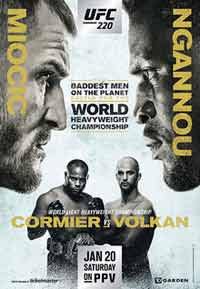 Review by AllTheBestFights.com: 2018-01-20, tough fight with some nice exchanges: Shane Burgos vs Calvin Kattar gets three stars (UFC Fight of the Night).

The undefeated Shane Burgos entered this fight with a perfect mma record of 10-0-0 (80% finishing rate) and he is ranked as the No.37 featherweight in the world. He fought twice last year winning over Charles Rosa and Godofredo Pepey Castro.
His opponent, Calvin Kattar, has an official record of 17-2-0 (53% finishing rate) and he entered as the No.46 in the same weight class. He suffered his last loss when he faced Don Carlo-Clauss in 2010, since then he has won nine consecutive bouts beating Andre Fili in 2017. Burgos vs Kattar is on the undercard of Stipe Miocic vs Francis Ngannou – UFC 220. Watch the video and rate this fight!