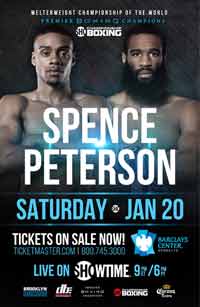 Review by AllTheBestFights.com: 2018-01-20, pretty good fight between Adam Kownacki and Iago Kiladze: it gets three stars.

The undefeated Adam Kownacki entered this fight with a perfect record of 16-0-0 (13 KOs=81%) and he is ranked as the No.11 heavyweight in the world. He fought twice last year beating Joshua Tufte and Artur Szpilka (=Szpilka vs Kownacki).
His opponent, Iago Kiladze, has a boxing record of 26-1-0 (18 knockouts) and he entered as the No.69 in the same weight class. He suffered his only defeat when he faced Youri Kayembre Kalenga in 2013, since then he has won six consecutive bouts beating Byron Polley and Pedro Rodriguez in 2017. Kownacki vs Kiladze is on the undercard of Errol Spence Jr vs Lamont Peterson. Watch the video and rate this fight!

Official video (just for the USA)