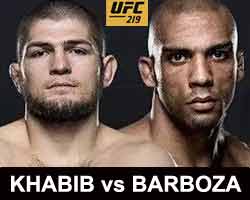 Review by AllTheBestFights.com: 2017-12-30, good pace with some nice exchanges: Khabib Nurmagomedov vs Edson Barboza gets three stars (UFC Performance of the Night).

The undefeated black belt in judo and two time combat sambo world champion Khabib Nurmagomedov entered this fight with a perfect mma record of 24-0-0 (67% finishing rate) and he is ranked as the No.6 lightweight in the world (currently the #1 in this division is Conor McGregor). After suffering different injuries between 2014 and 2015, he came back to fight in 2016 winning over Darrell Horcher (=Nurmagomedov vs Horcher) and Michael Johnson (=Johnson vs Nurmagomedov).
His opponent, the black belt in tae-kwon-do Edson Barboza, has an official record of 19-4-0 (63% finishing rate) and he entered as the No.4 in the same weight class. He lost to Tony Ferguson in 2015 (=Ferguson vs Barboza) but then he has beat Anthony Pettis (=Pettis vs Barboza), Gilbert Melendez (=Barboza vs Melendez) and Beneil Dariush (4-stars fight, Barboza vs Dariush). Nurmagomedov vs Barboza is on the undercard of Cris Cyborg Justino vs Holly Holm – UFC 219. Watch the video and rate this fight!