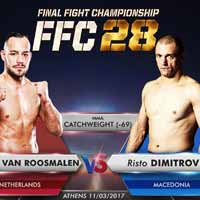 Review by AllTheBestFights.com: 2017-03-11, one sided fight between Robin van Roosmalen and Risto Dimitrov: it gets two stars.

The former Glory Fw and Lw champion Robin van Roosmalen is at his second professional mma fight (mma record 1-0-0) but he is ranked as the No.5 kickboxing welterweight in the world with a record of 48-16-3 (14 knockouts) while his opponent, Risto Dimitrov, has an official mma record of 2-2-0 (1 knockout). In his first bout Roosmalen beat Athinodoros Michailidis (4-stars fight, Roosmalen vs Michailidis) while Dimitrov fought twice last year losing to Tsvetan Kirilov and winning over Amel Sabanovic. Robin van Roosmalen vs Risto Dimitrov is the main event of Final Fight Championship 28. Watch the video and rate this fight!

Report broken video
« 2017 MMA fight – Mamed Khalidov vs Luke Barnatt – full fight Video ACB 54
2017 MMA fight – Francisco Trinaldo vs Kevin Lee – fight Video UFC FN 106 »
HELP US!!! Since the CORONAVIRUS pandemic started, AllTheBestFights.com has struggled to survive! If you have enjoyed this website for the past 10 years, today we ask you for a little help: