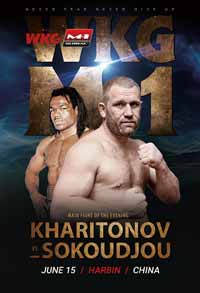 Sergei Kharitonov entered this fight with a professional mma record of 24-6-0 (96% finishing rate) and he is ranked as the No.40 heavyweight in the world. He lost to Javy Ayala in 2016 (=Kharitonov vs Ayala) but he came back to win in 2017 against Chase Gormley (=Kharitonov vs Gormley).
His opponent, the black belt in judo and former Ksw light-Hw champion Rameau Thierry Sokoudjou, has an official record of 18-17-0 (72% finishing rate) and he has already fought twice in 2017 beating Marcelo Tenorio and losing to Lukasz Jurkowski. Sergei Kharitonov vs Rameau Thierry Sokoudjou is the main event of M-1 Challenge 80. Watch the video and rate this fight!