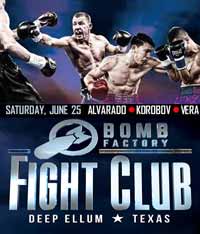 Review by AllTheBestFights.com: 2016-06-25, good fight between Matt Korobov and Brian Vera: it gets three stars.

The 2005 and 2007 world amateur champion Matt Korobov entered this fight with a pro record of 25-1-0 (14 knockouts) and he is ranked as the No.21 super middleweight in the world. He suffered his only loss when he faced Andy Lee in 2014 (=Korobov vs Lee), after this bout he came back to win in 2015 beating Josue Ovando.
His opponent, Brian Vera, has a boxing record of 23-10-0 (14 knockouts) and he entered as the No.54 in the same weight class but he comes off four consecutive losses, the last one against Rocky Fielding (=Fielding vs Vera). Korobov vs Vera is on the undercard of Mike Alvarado vs Josh Torres. Watch the video and rate this fight!