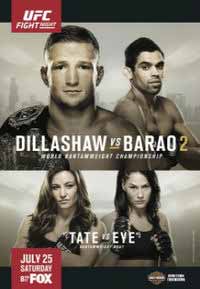 Review by AllTheBestFights.com: 2015-07-25, pretty good fight between Joe Lauzon and Takanori Gomi: it gets three stars.

Joe Lauzon entered this fight with a pro mma record of 24-10-0 (96% finishing rate) and he is ranked as the No.26 lightweight in the world while his opponent, the former PRIDE Lw champion Takanori Gomi, has a record of 35-10-0 (54% finishing rate) and he entered as the No.44 in the same weight class. Both fighters have lost their last bout: Lauzon was defeated by Al Iaquinta (=Lauzon vs Iaquinta) while Gomi lost to Myles Jury (=Jury vs Gomi). Lauzon vs Gomi is on the undercard of TJ Dillashaw vs Renan Barao 2 – UFC on Fox 16. Watch the video and rate this fight!