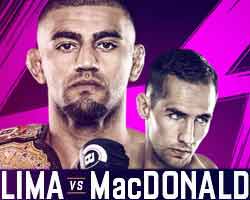 Review by AllTheBestFights.com: 2018-01-20, fight not particularly good between Rory MacDonald and Douglas Lima: it gets two stars.

The black belt in Bjj and current Bellator Ww champion Douglas Lima entered this fight with a pro mma record of 29-6-0 (83% finishing rate) and he is ranked as the No.8 welterweight in the world (currently the #1 in this division is Tyron Woodley). He lost to Andrey Koreshkov in their first fight in 2015 (=Lima vs Koreshkov I) but then he has won three fights beating Paul Daley (=Daley vs Lima), taking revenge on Koreshkov (=Koreshkov vs Lima 2) and defeating Lorenz Larkin (=Lima vs Larkin).
His opponent, Rory MacDonald (black belt in Bjj as well), has an official record of 19-4-0 (74% finishing rate) and he entered as the No.13 in the same weight class. He lost two consecutive bouts between 2015 and 2016, against Robbie Lawler (=Lawler vs MacDonald 2) and Stephen Thompson (=MacDonald vs Thompson), but he came back to win in 2017 with Paul Daley (=MacDonald vs Daley). Lima vs MacDonald, main event of Bellator 192, is valid for the Bellator welterweight title (Lima’s second defense); they also faced each other a second time on October 26, 2019 (Rory MacDonald vs Douglas Lima 2). Watch the video and rate this fight!