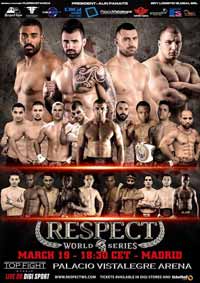 Review by AllTheBestFights.com: 2016-03-19, wild exchanges between Andrei Stoica and Mladen Kujundzic: it gets three stars.

The former SuperKombat champion Andrei Stoica entered this fight with a pro kickboxing record of 40-7-0 (25 knockouts) and he is ranked as the No.8 super cruiserweight in the world while his opponent, Mladen Kujundzic, has an official record of 25-7-0. Both fighters lost their last bout: Stoica was defeated by Loren Javier Jorge (=Stoica vs Loren) while Kujundzic lost to Maxim Bolotov. Stoica vs Kujundzic is on the undercard of Benjamin Adegbuyi vs Maxim Bolotov – Respect WS 1. Watch the video and rate this fight!