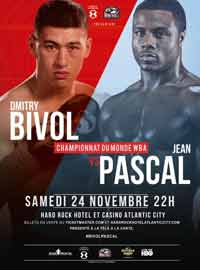 Review by AllTheBestFights.com: 2018-11-24, some good exchanges between Sergey Kuzmin and LaRon Mitchell but it is not enough to get three stars: it gets two.

The undefeated Sergey Kuzmin entered this fight with a perfect record of 13-0-0 (10 knockouts) and he is ranked as the No.21 heavyweight in the world. In his last three fights he has won over Amir Mansour (Sergey Kuzmin vs Amir Mansour), Jeremiah Karpency and David Price (Sergey Kuzmin vs David Price).
His opponent, LaRon Mitchell, has a boxing record of 16-1-0 (14 KOs=87%) and he entered as the No.112 in the same weight class but he comes off his first loss, against Rodney Hernandez; before this bout, in 2017, he had beat Mike Bissett. Kuzmin vs Mitchell is valid for the WBA Inter-Continental heavyweight title; undercard of Dmitry Bivol vs Jean Pascal. Watch the video and rate this fight!