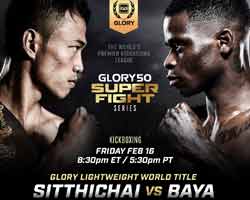 Review by AllTheBestFights.com: 2018-02-16, good fight between Sitthichai Sitsongpeenong and Chris Baya: it gets three stars.

The 2014 Lumpinee Ww and current Glory Lw champion Sitthichai Sitsongpeenong entered this fight with a pro kickboxing record of 118-30-5 (32 knockouts) and he is ranked as the No.1 super welterweight in the world. He lost to Superbon Banchamek in 2016 (Sitthichai vs Superbon 2) but then he has won six bouts beating Enriko Kehl, Dzhabar Askerov (Sitthichai vs Askerov) and Yi Long in his last three (Sitthichai Sitsongpeenong vs Yi Long).
His opponent, Christian Baya, has a record of 60-5-1 and he entered as the No.7 in the same weight class. He suffered two consecutive losses in 2016, against Chingiz Allazov and Ben Hodge, but then he has beat Josh Jauncey, Anatoly Moiseev, Massaro Glunder and Samo Petje. Sitthichai vs Baya is valid for the Glory lightweight title (Sitthichai’s third defense); undercard of Murthel Groenhart vs Harut Grigorian 3 – Glory 50. Watch the video and rate this fight!