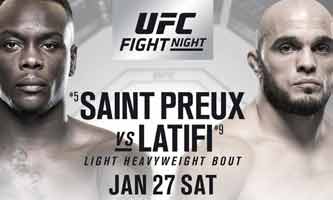 Review by AllTheBestFights.com: 2018-02-24, great finish between Ovince Saint Preux and Ilir Latifi: it is close to get four stars (UFC Performance of the Night).

Ovince St Preux entered this fight with a professional record of 22-10-0 (77% finishing rate) and he is ranked as the No.10 light heavyweight in the world (currently the #1 in this division is Daniel Cormier). OSP suffered three consecutive losses between 2016 and 2017, the last one with Volkan Oezdemir (St Preux vs Oezdemir) but then he has beat Marcos Rogerio de Lima (St Preux vs Rogerio de Lima), Yushin Okami (St Preux vs Okami) and Corey Anderson (Ovince St Preux vs Corey Anderson).
His opponent, Ilir Latifi, has a mma record of 13-5-0 (69% finishing rate) and he entered as the No.12 in the same weight class. He lost to Ryan Bader in 2016 (Ryan Bader vs Ilir Latifi) but he came back to win in 2017 with Tyson Pedro (Ilir Latifi vs Tyson Pedro). Latifi vs St Preux is on the undercard of Josh Emmett vs Jeremy Stephens – UFC on Fox 28. Watch the video and rate this fight!