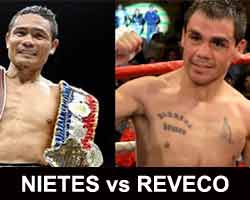 Review by AllTheBestFights.com: 2018-02-24, some good exchanges between Donnie Nietes and Juan Reveco but it is not enough to get three stars: it gets two.

The world champion in three different weight classes Donnie Nietes entered this fight with a professional boxing record of 40-1-4 (22 knockouts) and he is ranked as the No.1 flyweight in the world. He suffered his only loss when he faced Angky Angkotta in 2004, since then he has collected 29 victories and 3 draws beating Raul Garcia (Nietes vs Garcia), Edgar Sosa (Nietes vs Sosa) and Komgrich Nantapech in his last three (Donnie Nietes vs Komgrich Nantapech).
His opponent, the former world champion in two different weight classes Juan Carlos Reveco, has an official record of 39-3-0 (19 knockouts) and he entered as the No.3 in the same weight class. ‘Coton’ Reveco lost to Kazuto Ioka in 2015 (Reveco vs Ioka) but then he has beat Jesus Vargas and Komgrich Nantapech in 2017 (Juan Carlos Reveco vs Komgrich Nantapech). Nietes vs Reveco is valid for the IBF World flyweight title (Nietes’ first defense); undercard of Srisaket Sor Rungvisai vs Juan Francisco Estrada. Watch the video and rate this fight!

(Free embeddable video hosted on Youtube and not uploaded by AllTheBestFights)
https://www.youtube.com/watch?v=JnSuOgi3ffo