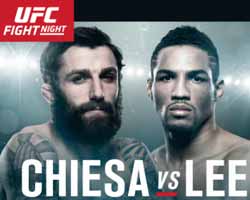 Review by AllTheBestFights.com: 2017-06-25, pretty good fight between Michael Chiesa and Kevin Lee: it gets three stars (UFC Performance of the Night).

The Tuf winner Michael Chiesa entered this fight with a professional mma record of 14-2-0 (71% submission victory rate – he has never won via ko/tko) and he is ranked as the No.13 lightweight in the world. He lost to Joe Lauzon in 2014 (=Chiesa vs Lauzon) but since then he has beat Mitch Clarke (=Chiesa vs Clarke), Jim Miller (=Miller vs Chiesa) and Beneil Dariush.
His opponent, Kevin Lee, has an official record of 15-2-0 (53% finishing rate) and he entered as the No.9 in the same weight class (currently the #1 in this division is Conor McGregor). He lost to Leonardo Santos in 2015 but then he has won over Efrain Escudero, Jake Matthews, Magomed Mustafaev and Francisco Trinaldo (=Trinaldo vs Lee). Kevin Lee vs Michael Chiesa is the main event of UFC Fight Night 112. Watch the video and rate this fight!