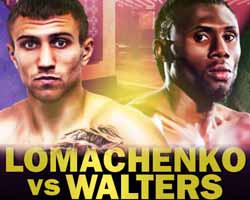 Review by AllTheBestFights.com: 2016-11-26, disappointing fight between Vasyl Lomachenko and Nicholas Walters: it gets two stars.

The 2012 and 2008 Olympic Gold Medalist and Wbo Fw champion Vasyl Lomachenko entered this fight with a professional record of 6-1-0 (4 knockouts – but he has an amazing amateur record of 396-1) and he is ranked as the No.5 super featherweight in the world (currently the #1 in this division is Jason Sosa). He lost to Orlando Salido at his second pro bout in 2014 (via split decision, Salido vs Lomachenko), but then he has won the vacant Wbo Fw title against Gary Russell Jr (=Lomachenko vs Russell Jr); he has successfully defended it three times and he has won the Wbo super-Fw title in 2016 with Roman Martinez (4-stars fight, Martinez vs Lomachenko).
His opponent, the undefeated former Wba Fw title Nicholas Walters, has an official boxing record of 26-0-1 (21 KOs=81%) and he entered as the No.6 in the same weight class. He fought twice last year beating Miguel Marriaga (=Walters vs Marriaga) and Jason Sosa (=Walters vs Sosa). Lomachenko vs Walters is valid for the WBO World super featherweight title (Lomachenko’s first defense). Watch the video and rate this fight!

Report broken video
« 2016 BOXING fight – Konstantin Ponomarev vs Silverio Ortiz – fight Video
2016 MMA fight – Robert Whittaker vs Derek Brunson – full fight Video UFC FN 101 »
HELP US!!! Since the CORONAVIRUS pandemic started, AllTheBestFights.com has struggled to survive! If you have enjoyed this website for the past 10 years, today we ask you for a little help: