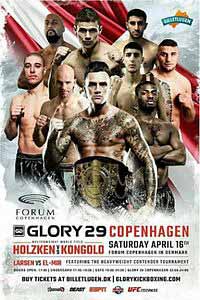 Review by AllTheBestFights.com: 2016-04-16, pretty good finish but it is not enough to get three stars: Anderson Silva vs Ismael Londt gets two.

Anderson ‘Braddock’ Silva entered this fight with a pro kickboxing record of 39-13-1 (24 knockouts) and he is ranked as the No.7 heavyweight in the world. He lost three consecutive fights between 2014 and 2015: against Errol Zimmerman (=Zimmerman vs Silva), Sergei Kharitonov (=Kharitonov vs Silva 2) and Jamal Ben Saddik but he came back to win in 2016 against Maurice Greene (=Silva vs Greene).
His opponent, the former SuperKombat Hw champion Ismael Londt, has a record of 36-6-1 (18 knockouts) but he comes off the loss against Badr Hari (=Hari vs Londt). Silva vs Londt is the semifinal of the Glory heavyweight contender tournament; undercard of Nieky Holzken vs Yoann Kongolo – Glory 29. Watch the video and rate this fight!