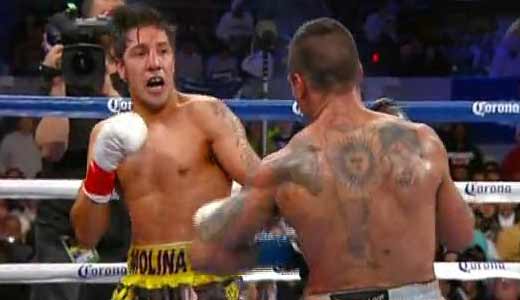 Review: 2014-04-26, exciting back and forth battle with four knockdowns thanks to an astonishing performance by two warriors: Lucas Matthysse vs John Molina is one of the best boxing fights of 2014, four stars! Lucas Martin Matthysse entered this fight with a record of 34-3-0 (32 KOs=94%) and he is ranked as the No.2 light welterweight in the world, he fought three times in 2013 defeating Mike Dallas Jr (=Matthysse vs Dallas) and Lamont Peterson (=Peterson vs Matthysse) but then he lost to #1 Danny Garcia (=Garcia vs Matthysse).
His opponent, John Molina, has a record of 27-3-0 (22 KOs=81%) and he entered as the No.20 lightweight, he fought four times in 2013 losing once, against then-undefeated Andrey Klimov (= Molina vs Klimov). Matthysse vs Molina is valid for the vacant WBC Continental Americas light welterweight title; undercard of Keith Thurman vs Julio Diaz. Watch the video and rate this fight!