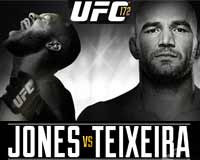 Review: 2014-04-26, tough fight with some good single shots but it is not enough to get three stars: Jon Jones vs Glover Teixeira gets two. Jon Jones entered this fight with a professional mma record of 19-1-0 (79% finishing rate) and he is ranked as the No.1 light heavyweight in the world, his only loss was, in reality, a disqualification against Matt Hamill due to multiple “12-6 elbows” (strike brought from a high position toward the floor). Jon ‘Bones’ Jones is the Ufc light-Hw champion since March 19, 2011 when he defeated Mauricio ‘Shogun’ Rua (=Jon Jones vs Mauricio Rua); since then he has successfully defended the title six times.
His opponent, Glover Teixeira, has an official record of 22-2-0 (86% finishing rate) and he entered as the No.6 in the same weight class, he is 34 years old (8 years older than Jones) and he is a black belt in Brazilian jiu-jitsu. Teixeira suffered his first defeat at his pro mma debut against Eric Schwartz in 2002 and against Ed Herman three years later; he is undefeated in the Ufc. Jones vs Teixeira, main event of Ufc 172, is valid for the Ufc light heavyweight title (Jones’ seventh defense), first Ufc title shot for Teixeira. Watch the video and rate this fight!