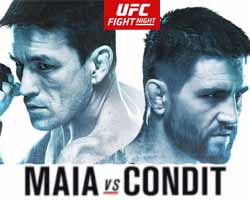 Review by AllTheBestFights.com: 2016-08-27, fight not so exciting between Demian Maia and Carlos Condit: it gets two stars (UFC Performance of the Night).

The black belt in Brazilian jiu-jitsu and 2007 ADCC champion Demian Maia entered this fight with a professional record of 23-6-0 (61% finishing rate) and he is ranked as the No.4 welterweight in the world (currently the #1 in this division is Tyron Woodley). He suffered two consecutive defeats between 2013 and 2014, against Jake Shields (=Maia vs Shields) and Rory MacDonald (=MacDonald vs Maia), but then he has won five bouts beating Matt Brown in his last one (=Maia vs Brown).
His opponent, the black belt in gaidojutsu and former interim Ufc Ww champion Carlos Condit, has a mma record of 30-9-0 (93% finishing rate) and he entered as the No.7 in the same weight class but he lost two out of his last three bouts, against Tyron Woodley in 2014 (=Condit vs Woodley) and Robbie Lawler in 2016 (4-stars fight, Lawler vs Condit). Between these two fights he beat Thiago Alves (=Condit vs Alves). Maia vs Condit is the main event of UFC on Fox 21. Watch the video and rate this fight!