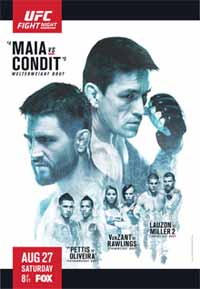 Review by AllTheBestFights.com: 2016-08-27, pretty good fight between Joe Lauzon and Jim Miller: it gets three stars (UFC Fight of the Night).

Joe Lauzon entered this fight with a professional mma record of 26-11-0 (96% finishing rate) and he is ranked as the No.19 lightweight in the world. He lost to Evan Dunham last year (=Lauzon vs Dunham) but he came back to win in 2016 beating Diego Sanchez.
His opponent, the black belt in tae-kwon-do and Bjj Jim Miller, has an official record of 26-8-0 (69% finishing rate) and he entered as the No.33 in the same weight class. He suffered two consecutive defeats between 2015 and 2016, against Michael Chiesa (=Miller vs Chiesa) and Diego Sanchez, but he beat Takanori Gomi in his last fight. In their first bout Miller defeated Lauzon via unanimous decision (December 29, 2012 Miller vs Lauzon I); this second fight is on the undercard of Demian Maia vs Carlos Condit – UFC on Fox 21. Watch the video and rate this fight!