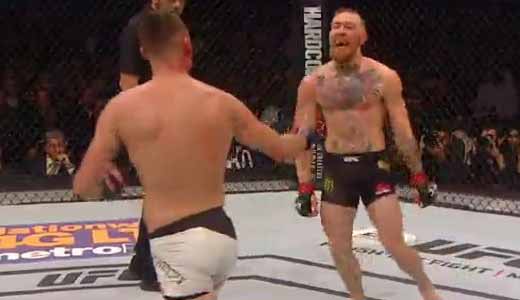 Review by AllTheBestFights.com: 2016-03-05, entertaining fight thanks to a good pace, some nice shots and a spectacular finish: Conor McGregor vs Nate Diaz is one of the best mma fights of the year 2016 and it gets four stars (UFC Fight of the Night and UFC Performance of the Night).

The Ufc Fw champion Conor McGregor entered this fight with a professional mma record of 19-2-0 (95% finishing rate) and he is ranked as the No.1 featherweight in the world but in this fight he moves up in weight class to the welterweight division. McGregor suffered his last defeat in 2010 when he faced Joseph Duffy, but since then he has won 15 fights (seven in the Ufc) beating, in 2015, Dennis Siver (=McGregor vs Siver), Chad Mendes (=Mendes vs McGregor) and Jose Aldo (4-stars-fight, Aldo vs McGregor).
His opponent, the black belt in Brazilian jiu-jitsu and Tuf 5 Lw tournament winner Nate Diaz, has an official record of 18-10-0 (83% finishing rate) and he entered as the No.9 lightweight. He lost to Rafael dos Anjos in 2014 (=dos Anjos vs Diaz) but he came back to win in 2015 defeating Michael Johnson (=Johnson vs Diaz). ‘The Notorius’ McGregor vs Diaz is the main event of the UFC 196 (on the original fight card Conor was expected to face Rafael dos Anjos but the Brazilian pulled out due to a broken foot). Watch the video and rate this fight!

Their next fight: Nate Diaz vs Conor McGregor 2