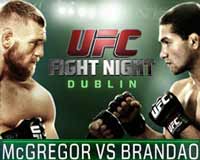 Review: 2014-07-19, good exchanges betweenn Conor McGregor and Diego Brandao: it gets three stars (UFC Performance of the Night). Conor McGregor entered this fight with a professional mma record of 14-2-0 (93% finishing rate) and he is ranked as the No.20 featherweight in the world, he suffered his last loss in 2010 when he faced Joseph Duffy, since then he has won 10 consecutive bouts, the last two in the Ufc: against Marcus Brimage (=Brimage vs McGregor) and Max Holloway (=McGregor vs Holloway).
His opponent, the black belt in Bjj Diego Brandao, has an official record of 18-9-0 (78% finishing rate) and he entered as the No.30 in the same weight class, he fought three times in 2013 beating Pablo Garza (=Brandao vs Garza) and Daniel Pineda but then he was defeated by Dustin Poirier (=Poirier vs Brandao). McGregor vs Brandao is the main event of UFC Fight Night 46 – Dublin. Watch the video and rate this fight!

Where: The O2, Dublin, Ireland