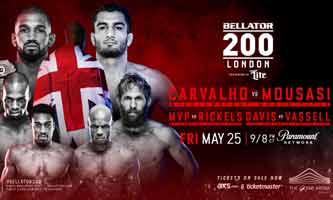 Review by AllTheBestFights.com: 2018-05-25, fight not particularly good between Michael Page and David Rickels: it gets two stars.

The undefeated Michael Page entered this fight with a perfect mma record of 12-0-0 (83% finishing rate) but he is not ranked as he hasn’t fought since November 19, 2016 when he defeated Fernando Gonzalez (Michael Page vs Fernando Gonzalez). Before this bout, in 2016, he had also won over Jeremie Holloway (Page vs Holloway) and Evangelista ‘Cyborg’ Santos (4-stars-fight, Page vs Cyborg Santos).
His opponent, the former Bellator Lw tournament champion (Season 8) David Rickels, has an official record of 19-4-0 (63% finishing rate) and the last time he lost was in 2015 with Michael Chandler (Chandler vs Rickels 2), after this fight he has collected three victories and one no-contest beating Adam Piccolotti in his last bout. Venom Page vs Rickels is on the undercard of Rafael Carvalho vs Gegard Mousasi – Bellator 200. Watch the video and rate this fight!