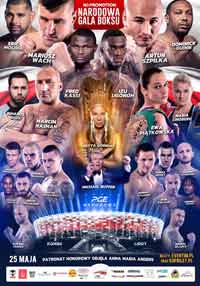 Review by AllTheBestFights.com: 2018-05-25, boring fight between Artur Szpilka and Dominick Guinn: it gets one star!

Artur Szpilka entered this fight with a boxing record of 20-3-0 (15 KOs=75%) and he is ranked as the No.32 heavyweight in the world but he comes off two consecutive losses: with Deontay Wilder in 2016 (Wilder vs Szpilka) and Adam Kownacki in 2017 (Artur Szpilka vs Adam Kownacki); his last victory was in 2015 against Yasmany Consuegra (Artur Szpilka vs Yasmany Consuegra).
His opponent, Dominick Guinn, has an official record of 35-11-1 (24 knockouts) but he is not ranked as he hasn’t fought since March 26, 2016 when he was defeated by Hughie Fury; before this bout, in 2015, he had beat Donnie Davis. Szpilka vs Guinn is the main event of the evening. Watch the video and rate this fight!